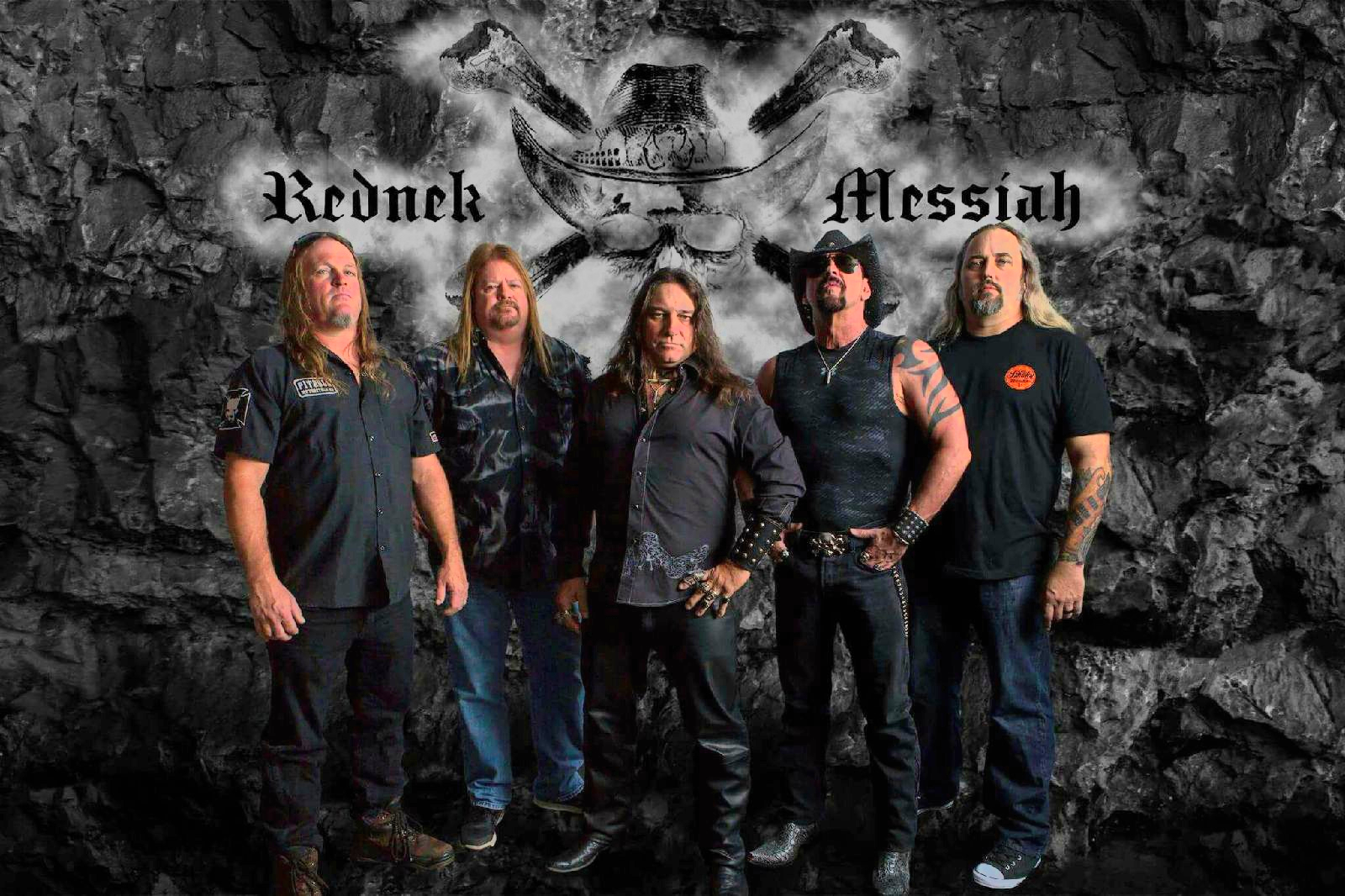 "REDNEK MESSIAH" out of Orlando, Florida. We came together to draft a new  style of music that we call "Swamp Rock" Combining some Southern Rock influences with Hard Rock /Metal the music flows, producing a raw, head banging power with a raucous southern stomp our plan is to make a mark in the 2000's and beyond. It's all about the love of the music and coming together to create something uniquely grand and full of energy."Rednek Messiah" hit the studio to record with award winning Producer/Engineer Jay Stanley of "J. Stanley Productions" who has worked with amazing artists as: Sevendust, Creed and Matchbox 20 and many more.. to record their debut CD, self titled “Rednek Messiah”.
Rednek Messiah’s first studio album titled: "Rednek Messiah" features 10 incredible and aggressive tracks, including the lead single "Don't Pray For Me”!! for which they made a video. This album is true to southern roots while maintaining the Hard Rock angst.

Mixing a savory spectrum of talent:

Drummer: Greg Talley of Carnival Crue, Eternal Sabbath, 13 Below, Thunderfoot and many more.. brings a power to the music with his flashy style and hard hitting intensity.

Lead Guitarist: Kenny Barber known as (KB) from Naphobia, Punishment, 13 Below and more.. brings in the energetic metal influence with his mesmerizing performance and ripping and roaring guitar riffs .

Bassist: Shane Scaramellino of bands :formally from:Never & Dakota Black . Shane is as pro as it gets, he is right on the money with a pounding bass that keeps you moving.

You can Find and buy the NEW"
" REDNEK MESSIAH" ALBUM* 
Titled: 2 SIDES OF THE COIN @ link:         https://www.amazon.com/s/ref=nb_sb_noss?url=search-alias%3Ddigital-music&field-keywords=rednek+messiah

Get you concert tickets at:

Guitar Center and the Haven Lounge.

New Album: 2 Sides of the Coin has been released!!!

Come get your copy of our new album: 2 Sides of the Coin!!!

Press this link to listen to REDNEK MESSIAH's inter view with Bobby Steele- "The Navajo Rambo" of WVNM Radio!

WVNM VNM Radio Station out of New Mexico Playing REDNEK MESSIAH. DJ/Deb and DJ: The Navajo Rambo- Bobby Steele has been spinning REDNEK MESSIAH Music and We appreciate the many requests that we have received!

REDNEK MESSIAH being [layed on: WJRR 101.1 in Orlando

Listen to WJRR 101.1 Orlando Rock Station! Our Song "NOt Anymore" has been played. We appreciate WJRR 101.1 and all of our fans requesting us!

You can Find and buy the NEW"
" REDNEK MESSIAH" ALBUM* 

Indie Music Buzzz
October 11
Redneck Messiah was in the beginning lineup of bands opening up for Molly Hatchet on October 4th
The guys ratcheted out their brand style of hard grunge metal also known as Swamp Metal. These guys were the trigger that launched the concert helping to get everyone into the rock mode for the evening. From the raunchiness of the guitar to the deep vocals driving the heat onto the stage, these guys drove the biker chicks nuts. Their music was hard on the edge and pumping.

Come join "REDNEK MESSIAH" in "The Rock till You Drop" Tour.

Join "REDNEK MESSIAH" at the TIN HOUSE RANCH ENTERTAINMENT COMPLEX in 3300 Stone st, Oveido, FL. Bring a lawn Chair or Blanket. It will be crowded. GET Ready to ROCK!!!

REDNEK MESSIAH will be performing live with Stranger Than Fiction, Saturday 8/20/16.

REDNEK MESSIAH WILL BE PERFORMING LIVE AT THE BROOKLYN BOWL AT 10PM.21 & UP WELCOME. DOORS OPEN AT 8PM.

REDNEK MESSIAH WILL BE PERFORMING THE BLUEBIRD CAFE AT 11PM. ADMISSION IS: 10:00 AT DOOR.

REDNEK MESSIAH LIGHTING UP NASHVILLE AT "THE BASEMENT". 21& UP WELCOME. DOORS OPEN AT 7PM . ADMISSION IS:$10.00

REDNEK MESSIAH WILL BE PERFORMING At the Cheetah Club in Jacksonville Florida at 9pm. Admission is $15.00 at door. 21 & up welcome.

Saturday from 1-7pm Rednek Messiah will be performing with "Throne of the Fallen" and "Southern Rebel Battalion". In a Cancer benefit to raise money for  "Tony Pelham". There will be a raffle, Auction, drink specials and much more. We hope to see you There!

Halloween show. There will many many people. Having a Sppoktacular Time.

Gitty up and Go

Join us at the Post Time Lounge @ the Corner of 17-92 & Dogtrack Rd. Longwood, FL 32750 . For a "Rockin' Good Time": Benefit for for "Kevin Neal" a renown World Class drummer. There will be a Poker Bike Run, a Silent Auction a 50/50 Raffle and food and Drink Specials As well as Celebrity Entertainment. This event starts at 3pm until close.

Artists to perform at this event are:

Tony Thornrock of "Art of Gene"

Come ROK OUT REDNEK MESSIAH at the ROK BAR

The Shovelhead Lounge: ROCK FOR THE TROOPS!

Come Support your troops: ROCK FOR THE TROOPS!! 7 Bands all day show:

Show starts at 12 noon until 2am

COME ENJOY THE SOUNDS REDNEK MESSIAH AND MANY MORE BANDS OF THE SSA FESTIVAL OF MUSIC.   170 Bands 28 Stages

COME TO THE TINHOUSE RANCH ENJOY REDNEK MESSIAH AND SEVERAL OTHER BANDS PLAYING.  A NIGHT OF FOOD, DRINKS AND MUSIC

Shovelhead Lounge: Battle of the Bands: battle for a Cure

Come out and show your support, Place your vote for the best Band and help in the fight to cure Cancer.

Rednek Messiah, Iron Cross and many more bands will be battleing it out to Cure Cancer.

Get you concert tickets at:

Guitar Center and the Haven Lounge.

Get your Tickets @ Guitar Center, Sam Ash Music and The Haven Lounge!

The last show before WHO WAS I goes on European Tour!!!

Special Thanks to our Friends, "WHO WAS I"

Join REDNEK MESSIAH at the BIKE WEEK 2018  EVENT. Blasting it our for for you and thousands of ears only!!! Live to Have FUN!!! Rev it UP!!!

REDNEK MESSIAH performing at Tin House Ranch. Come out and enjoy the Party!!

Rock out with REDNEK MESSIAH Headlining at The Shovelhead Lounge

Update Required To play the media you will need to either update your browser to a recent version or update your Flash plugin.
Download Download
Back
You Tube